Library volunteer Debbie Becker is trying not to swear. “I got stung today,” she says, calmly. “Right through my jeans.” Bee stings are not something that most volunteers with the Oak Park Public Library have to worry about during a shift. But Becker is not like most library volunteers. As a hobbyist beekeeper with nearly 10 years of experience managing her own backyard hives, she’s been instrumental in the library’s new initiative to install and maintain two beehives, buzzing with up to 20,000 Italian honeybees, on the Main Library’s green roof in April.

On a hot day this past June, as Becker inspected the hives and harvests some honeycomb to take to a library program later in the day, she estimated that the colonies have grown to about 40,000 honeybees. There have been some setbacks and stings along the way, but overall the hives are in good shape — healthy and productive.

Beekeeping seems like a science, but it's really an art. It's a really fascinating thing to do. You can never quite get it right, and there's always room for improvement. 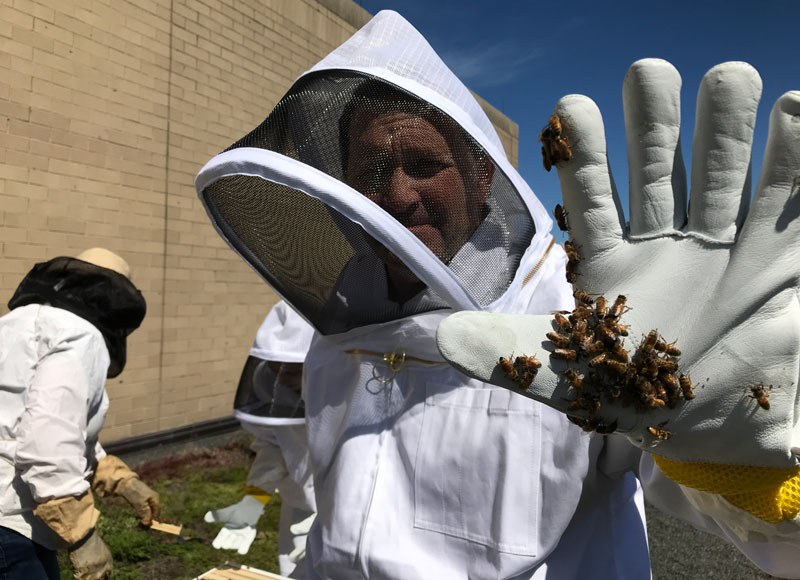 Why keep bees at a library?

In April 2019, the library joined a small community of beekeepers licensed to keep up to two beehives in Oak Park, a dense “urban suburb” just west of Chicago. Other Oak Park beekeepers include resident hobbyists, the village government, and the local park district. Other nonprofit institutions around the world have placed beehives on their roof, including museums like London’s Victoria and Albert Museum and libraries like California’s Redwood City Public Library.

The library’s rooftop hives are part of its ongoing efforts to inspire understanding, curiosity, partnership, and education. And we’re learning a lot with our community, not only about honeybees but also about pollinators more widely.

In July, the library collaborated with a local food co-op for an “All About the Bees” program, which we hosted in our new sensory garden outside one of the library’s branch locations. Children and adults got to see the honeycomb that Becker had harvested earlier in the day, learn more about bees, and taste a variety of local honeys. Participants also took home “bee feed mix” seed packets, and we later planted those pollinator-friendly seeds with community members in the sensory garden.

And because the hives are not accessible to the public on the library’s roof, we are in the process of installing a “bee cam” so that anyone can tune in to see the beehives via the internet and learn more.

Honeybees as a “gateway bug”

“I like to argue that honey bees are a gateway bug,” writes Hilary Keany on the blog Keeping Backyard Bees. “Once you get into beekeeping, you start to notice and wonder about other types of bees and beneficial insects.”

It’s often said that pollinators—including honeybees and other bee species, butterflies, birds, and bats — provide for one of every three bites of food we eat. That’s because, in order to produce seeds, fruit, and more plants, plants must be pollinated. Unfortunately, many wild and managed pollinators are in decline, for reasons including loss of habitat, disease, climate change, and pesticide use.

Honeybees have gotten a lot of attention in the past decade. Around 2007, news about “colony collapse disorder”—in which adult worker bees disappear from the colony, leaving the queen and baby bees behind — began to cause global concern and action to “save the bees.” That’s because, besides producing honey and beeswax, the western honeybee (Apis mellifera, which is not native to the United States) plays an important role in commercial agriculture. But researchers are questioning more and more the effect that managed hives have on wild bee species.

There are thousands more wild bee species to consider than just honeybees, most of which lead solitary lives in contrast to the social honeybee. Researchers are studying whether and how managed honeybee colonies may compete with native wild bees for food and transmit diseases when feeding from the same flowers.

To learn more, we reached out to experts, including the principal investigator of the Dolezal Bee Research Lab at the University of Illinois. Adam Dolezal, assistant professor in the Department of Entomology, wrote to us that research into how managed honeybees affect wild bees has become “a hot topic” recently, yet the evidence is not clear.

Both honeybees and native bees are valuable to humans and to the environment, and honeybees can be a great public education and outreach tool, Dolezal added. “Had honey bees not been 'in trouble' and beekeepers not lobbied for their importance, the focus on bees as a whole would be much less," he wrote in an email.

Many of the things you might do to help honey bees, like providing refuge from pesticide exposure or planting flowers, will also benefit wild bees.

Adam Dolezal, Assistant Professor in the Department of Entomology, University of Illinois

“Spread the word and keep on planting”

Becker, the library’s volunteer beekeeper, thinks that limiting the number of honeybee hives in an area is a good idea. Above all, she says, “Planting native flowering plants is the best thing you can do for all bees, natives and the honeybees, to provide enough forage for everybody.”

Looking ahead, the library plans on working with the park district in its landscaping plans, and making flowers that support bees a key part of garden areas. “Spread the word and keep on planting,” Becker says.

Kristen is a versatile editor and writer with nonprofit, marketing, academic publishing, and professional association experience.